Current calculation short circuit necessary for the correct selection and detuning of protective equipment. A short-circuit current occurs when the current-carrying parts of the phases are connected to each other or to a grounded electrical receiver in circuits with a dead-earthed neutral and zero wire . Its value, A, can be determined by the formula

where u f - phase voltage nets, B;

R is the active resistance of one wire of a short circuit, Ohm;

where UH , IH - rated voltage and current of the transformer;

The values ​​of UH , l N and U to % for the corresponding transformer are given in chapter 5.

Selection electrical apparatus carried out by its functional purpose, by the type of voltage and current, -> the magnitude of the power.

It should be borne in mind the current trend, which is that when choosing between fuses and circuit breakers, the latter is preferred because of their greater reliability, better protection from non-phase modes, versatility, etc.

The choice of apparatus for voltage is in accordance with the nominal voltage specified in the passport of the apparatus, and its kind (alternating, constant) rated voltage supply network. When choosing a device by current, it should be noted that its rated current should not be less than the operating current of the installation.

Circuit breakers are selected primarily by nominal values voltage and current. Then, the setpoint currents of the thermal and electromagnetic releases are determined.

The heat release of the automat protects the electrical installation from prolonged overcurrent. Setting current thermal release is assumed to be 15-20% more than the operating current:

where 1 P is the operating current of the electrical installation, A.

where K = 4.5-10 is the ratio of the current response of the electromagnetic scavenger.

The selected circuit breaker is checked for sensitivity and breaking capacity. Automatic machines with a rated current of up to 100 A should operate under the condition

The sensitivity of an automaton having only a thermal release is determined by the ratio:

You can not buy a machine with a damaged case, with visible cracks, chips. It is also impossible to use machines with more than the rated current rating. First of all, the circuit breaker is selected based on the characteristics of your wiring and loads.

How to choose a circuit breaker

Automatic machines should be purchased in special stores and well-known manufacturers of circuit breakers. The cost of such machines is certainly higher, but it will go to the background if it concerns your security. The choice of circuit breakers carried out by such criteria as;

- the number of poles of the machine;
- long operating voltage ;
- maximum permissible operating current of the switch;
- breaking capacity;
- selectivity of the machine.

Determination of the number of poles of the machine 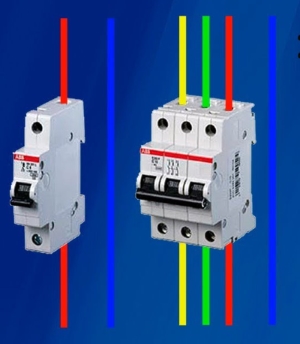 In everyday life, with a single-phase network at the input and for individual machines, single-pole structures are used. Bipolar machines can be used on input. In this case, the probability of operation of the two-pole automaton is doubled, in three phase networks use automata on three or four poles.

Rated voltage of the machine

The plastic case of the machine contains information about its characteristics and its operating voltage, which should be Unom ≥ U network equal to or greater than the line voltage. 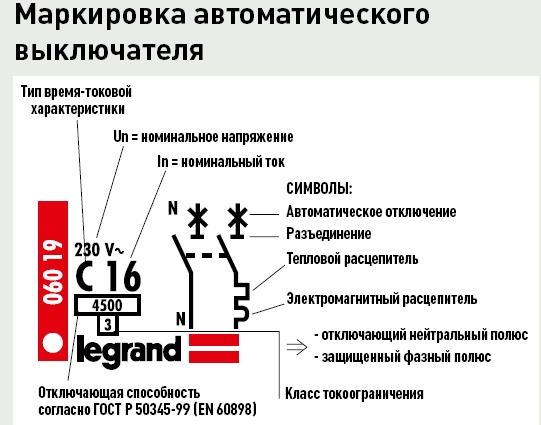 The main characteristics of the circuit breaker are marked on its case.

Selection of a circuit breaker for load current

To protect the wiring from overheating under high load, the following conditions should be taken into account:

This characteristic takes into account the ability of the machine to disconnect the contacts without sticking from short-circuit currents. These values ​​of currents to. H. indicated on the switch housing.

It is better to choose machines with a guaranteed ability to switch off at currents to. H. equal to 3 - 4.5 kiloampere. The cost here is not looking - it's still your safety. 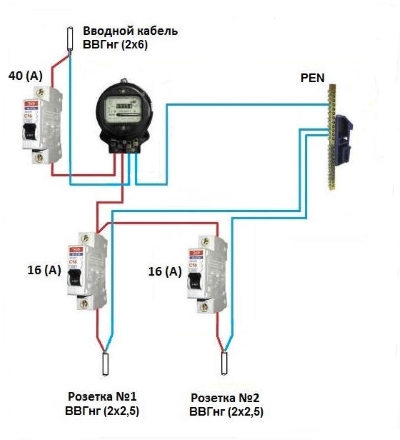 An example of the selectivity of circuit breakers

For good selectivity, the input automat should have a value of the rated current greater than the automata in the groups, but not exceed the maximum current of the electrical wiring. In groups, automata are selected according to the load current of this group. That is, in the event of a short circuit in the kitchen, the automatic socket kitchen panel will turn off, and not the lighting.

Thermal load of several machines installed in a row

When the circuit breakers are located in the electrical panel in a row, the temperature of the automata will increase and the nominal current of the automaton will decrease by the correction factor K of table 2.

Table 3 shows the dependence of the rated current on the external temperature, which must also be considered when choosing a circuit breaker. 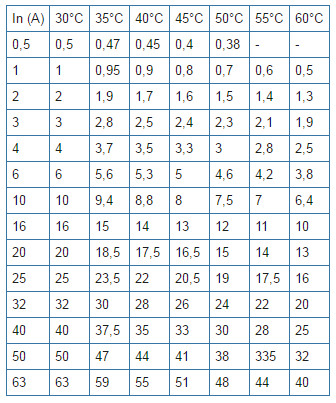 In the past, electrical plugs, usually ceramics, were used to protect electrical wiring and electrical equipment in everyday life from such abnormal modes of operation as overload or short circuit. The design of these devices is quite simple.

The disadvantage of these devices is that when the fuse blows, no one was concerned with the choice of a fusible link. Later, the traffic jam could not work at the right time, which was not rarely the cause of many fires.

At the present time, automatic circuit breakers (AB) have come to replace old traffic jams, which have many advantages and are more reliable in operation than traffic jams. Structurally, the AB is a module with two input / output contacts and a power button (single-pole automat).

The working mechanism of the circuit breaker is in a closed plastic case. In the back of the machine has a special latch, thanks to which it can be securely fixed to the DIN-rail when connecting to the electrical panel .

The selection of circuit breakers is a demanding task that needs to be taken seriously. In the event of an emergency, a correctly selected machine is a guarantee of protection not only of your equipment, but also of your life.

A circuit breaker is a switching device designed to automatically open an electrical circuit at the time of occurrence of short circuits or overloads.
In the diagrams are denoted by the letters AB or QF (European standard).

The main indicators that are referenced when choosing automata are:

one#. Number of poles

The number of poles of the automaton is determined from the number of phases of the network. For installation in a single-phase network use single-pole or two-pole. For three-phase network apply three-and four-pole (network system grounding neutral TN-S). In residential sectors, single or double pole machines are commonly used.

To find out the maximum operating current for the network section (for example, for an apartment) you need to find the total power. To do this, we summarize the power of all the devices that will be connected through this machine (refrigerator, TV, St.-oven, etc.). The amount of current from the received power can be found in two ways: by comparison or by the formula.

Breaking capacity. The choice of the automaton by the rated breaking current is reduced to ensure that the current which the circuit breaker is capable of disconnecting is greater than the short-circuit current at the installation point of the device: The rated breaking current is the largest short-circuit current. which the machine is able to turn off at rated voltage.